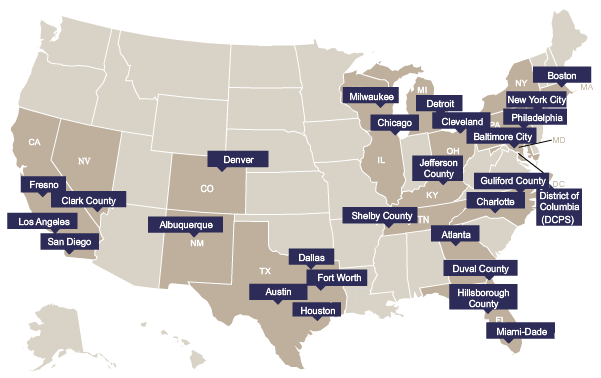 Congress appropriated funds for a district-level NAEP assessment on a trial basis in 2001 after discussions between the National Center for Education Statistics (NCES), the National Assessment Governing Board (NAGB), and the Council of the Great City Schools (CGCS).

The assessments administered in TUDA districts are exactly the same as those given nationally, using identical administration procedures. Similar to national and state NAEP, TUDA districts do not receive individual scores for students or schools. TUDA districts can monitor their progress over time in Mathematics and Reading at grades 4 and 8.

In addition to comparing TUDA results to national and state results, TUDA results can also be compared to results from large cities nationwide. NAEP uses large city (formerly referred to as large central city) as a comparison group because the students are most similar to the students in TUDA districts. Large cities include students from all cities in the nation with populations of 250,000 or more, including the districts participating in TUDA.

For more information on the TUDA program, see the TUDA Frequently Asked Questions.

Florida results are compiled into reports by both NCES and Florida NAEP. Reports are available on the pages linked below:

Get the latest information on news, events, and more